The Beauty of Madame X 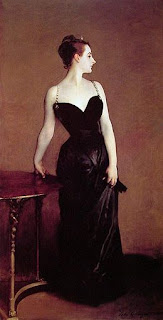 Here we see Sargeant's portrait of Virginie Gautreau that caused a scandal at the Paris Salon of 1884.  The history of the painting is fascinating in and of itself, but I want to write about the portrait from the point of view of the feminine figure, and its relationship to self esteem.

Why was this painting more scandalous than the nudes that were also shown at the exhibition?  Viewers reacted negatively to the haughtiness of the pose, and the shocking paleness of Madame Gautreu's skin, with she achieved with a lavender powder.  Also, in the original, the jeweled strap had fallen off of her  right shoulder.  That and the sheer size of the paining, ( I read that it is seven feet tall), gave it a kind of overwhelming sensuality that a significant number of the viewers objected to.

I have never seen the portrait in person, but my reaction, even to the photographs I have seen of it, is always one of profound admiration.  "Yes!" I exclaim inside when I see this image.  "That is what I mean by beauty!"  Years ago, I first heard the phrase, "Beauty is contrast", and The Portrait of Madame X is an excellent example of this claim.  Her white skin against the black dress, her body confidently turned toward us, while her face is turned deliberately away, and most strikingly from my point of view, the broad sweep of her glowing shoulders in contrast to her narrow waist which then flares into hips that many modern women would want to cardio right off.  What draws my eye the most though, is the curving strength of her right arm.  It reminds me of Adam's arm in Michelangelo's painting in the Sistene Chapel.  I don't want to be harsh, but consider the current state of Angelina Jolie's arms, and ask yourself if our slender fetish has gone to far.

In my work as a trainer and coach I always encourage my clients to find their own unique expression of the physical ideal they are after.  Our culture, media, and society have been severely limiting the definition of feminine beauty ever since the late sixties.  Something seemed to happen after the advent of television that has led to the promotion of a "status figure" that is almost impossibly lean.  I have to be careful not to allow my distrust of extreme thinness to become a prejudice that I hold.  Besides, some of my best friends are naturally slender.  No, what I am calling for is the broadest definition of beauty we can find.  First person accounts of Madame Gautreau's allure are just as likely to mention her physical grace as her striking appearance when trying to describe her glamour.  In other words it wasn't just about the way she looked, it was about how she moved.  Virginee was considered to be a professional beauty who was expected to represent the very hight of fashion wherever she appeared.  The third of the viewers who reacted so negatively at the Paris Salon of 1884 claimed that the portrait went to far, that it was vulgar.  I suggest that Viginiee was celebrating herself while giving the people what they said they wanted.  I think that her appearance was so powerful that it inevitably incited the kind of envy that brings out the sharpest, cruelest tongues.

What might Madame X say to you about your fitness journey?  If  you do believe that beauty is a desirable expression of health, at what point does your physical appearance, and your understandable pride in it, leave you open to criticism?  Plenty of people smile and say, "If you've got it flaunt it" but do they really mean it?  I do believe that so many women are turning away from the personal expression of their own beauty and style because they fear criticism.  Why in the world should "Skinny Girls" (sorry Bethenny) be the only one's who can strut their stuff without too much concern for the consequences?  Consider the loss to the economy when the majority of women are afraid to celebrate themselves with fashion.

Ever since my first post on this blog I've been asking myself, at what point does my quest for fat loss become a kind of slavish pandering to current fashion?  The truth is that the "X" shaped body that we see in this portrait has always been my ideal.  Perhaps it's time to stand up for it instead of struggling to make myself into an "H" instead.  It is time to make this a year of living honestly.  A time to eat well in terms of health and satisfaction, move joyfully whenever possible, and let the body that represents genuine physical well being reveal itself.
Posted by Catherine Gordon at 6:42 AM